What are smart machines? 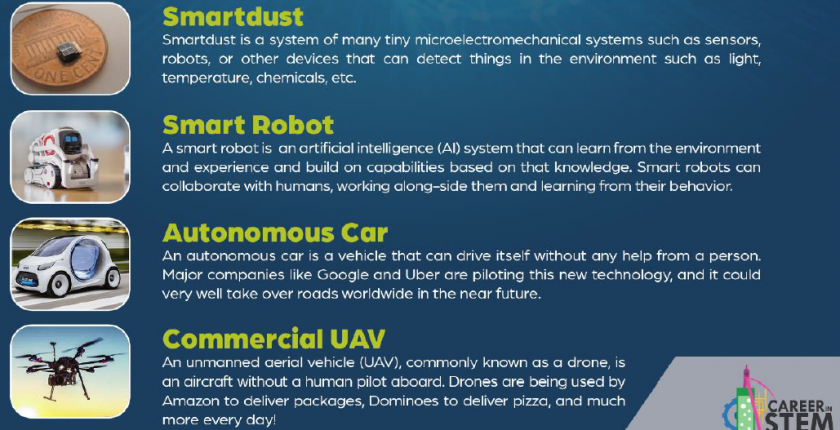 It is no secret that technology is smarter than ever. Siri can tell us literally anything we want to know, flying robots (drones) deliver pizza, and of course a scary movie or two about machines taking over the world. So what makes a smart machine smart?

In simple terms, a smart machine is one that can think on its own to a certain degree. Smart machines are ‘cognitive computing systems’ meaning they can make decisions and solve problems without the help of a human. Smart machines are made smart by advanced computer programming and technology that enables the machine to process vast amounts of data rapidly and ‘make decisions’ based on the data. For example, Siri knows the answer to ‘What is the weather today’ because she is connected to the data streaming from your weather app. Smart machines (ex: your smartphone) are connected to other machines (ex: the Weather Channel network), which makes them ‘smart’.

In addition to the smartphone you love so much, here are some other smart machines:

Smartdust: Smartdust is a system of many tiny (sometimes even microscopic!) systems such as sensors, robots, or other devices that can detect things in the environment such as light, temperature, chemicals, etc.

Smart Robot: A smart robot is an artificial intelligence (AI) system that can learn from the environment and experience and build on capabilities based on that knowledge. Smart robots can collaborate with humans, working along-side them and learning from their behavior.

Autonomous car: A smart (also known as autonomous) car is a vehicle that can drive itself without any help of  person. Major companies like Google and Uber are piloting this new technology, and it could very well take over roads worldwide in the near future.

UAVs: An unmanned aerial vehicle (UAV), commonly known as a drone, is an aircraft without a human pilot aboard. Drones are being used by Amazon to deliver packages, Dominoes to deliver pizza, and much more every day!

There are some really cool careers related to SMART machines – use the Career In STEM Explorer to learn more!