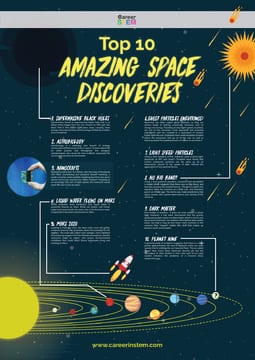 Over the course of this week, online campers will learn about careers in space, and participate in fun activities to learn more about what space professionals actually DO. We are in the midst of a new age of space discovery, where new and exciting things are being found daily. Here is a list of the top 10 most amazing space discoveries to start off the week:

1. Supermassive Black Holes: Astronomers found a supermassive black hole that is 12 billion times bigger than our sun. Known as PDS 456, this black hole is two billion light-years away, carrying more energy every second than all the energy emitted by a trillion Suns combined.

2. Astrobiology: Astrobiology is a relatively new branch of biology concerned with the study of life in space. To learn about life on other planets and throughout the universe, astrobiologists also study life here on Earth, especially life surviving in extreme environments.

3. Liquid Water Flows on Mars: NASA scientists have confirmed that liquid water is presently flowing on Mars. While ice sheets and frozen water have been known for years, this is the first time water in liquid form has been discovered on Mars.

4. Planet Nine: A growing body of evidence suggests that there is a ninth planet approximately the size of Neptune within our solar system that is orbiting the sun beyond Pluto. The so-called Planet Nine hasn’t been observed directly yet, but the movement of other bodies in that outer part of our solar system indicates the presence of a massive body, researchers say.

5. No big bang?: Using a new quantum equation, scientists have developed a model which suggests that there was no Big Bang, and that the universe has existed forever. The terms used in the equation keep the universe at a finite size, and therefore give it an infinite age. The terms also make predictions that agree closely with current observations and density of the universe.

6. Mars 2020: Landing in February 2021, the Mars 2020 rover will gather evidence towards key questions about the potential for life on Mars. The rover will collect core samples, test a method for producing oxygen from the Martian atmosphere, identify resources (such as water), and assess environmental conditions that could affect future astronauts living and working on Mars.

7. Ghost particles (neutrinos): Neutrinos are often called ghost particles, as they are almost made of nothing; practically massless, with no charge nor energy. Traveling at near light-speed, neutrinos are one of the universe’s most abundant and essential ingredients and are created as a byproduct of nuclear fusion from the sun. Scientists have used neutrinos to learn about the processes that go on in the sun, as well as learning about the building blocks of nature as we know it.

8. Light speed particles: Using a new variation on the methods used to bend light, physicists at MIT and Israel’s Technion have found that certain subatomic particles can be sped up all by themselves, almost to the speed of light, without the application of any external forces.

9. Dark Matter: Dark matter is invisible – it does not emit, reflect, or block light. However, it has been discovered that the gravity produced by dark matter can bend light, which is how it was discovered. Scientists now believe not only that dark matter exists, but that is may be five times more common in the universe than “regular” matter (the stuff that makes up planets, earth and people!).

10. Nanocrafts: Backed by billionaire Yuri Milner, with the help of Facebook CEO Marc Zuckerberg and physicist Steven Hawking, a small nanochip-sized satellite weighing less than one gram will be sent to our nearest star, Alpha Centauri. Traveling at an amazingly fast 20% of light-speed, the nanocraft could reach the star in just 20 years.

Which space discovery do you think is the most amazing? Why? Is there a discovery you think should have made this list? Leave us a comment below!